Unprotected salmon farming - Blame it on the wild salmon

“Virus detected at fish farm.” It seems like that headline is popping up in the news more often these days. Is it because of heightened awareness of salmon pathogens in the media or is it because of something different happening in the ocean? 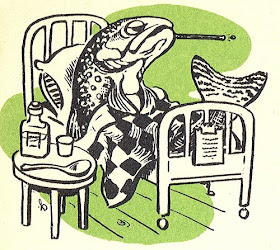 One example is the infectious hematopoietic necrosis virus - IHNv for short. It has been in the headlines a lot recently. The science says it's an endemic pathogen native to Pacific salmon - so common it is also known as sockeye disease. Atlantic salmon on the other hand, are very susceptible to IHNv. They have no natural immunity and past outbreaks in British Columbia farmed salmon have resulted in disastrous losses. Salmon farmers say they have learned lessons and now practice better husbandry at their operations.

Since there is no treatment, a vaccine was apparently developed to protect the farmed fish from IHNv. Salmon farmers claim to vaccinate. One of their videos claims it to be a 'fact'. This 'fact' was repeated in a submission to the Cohen Commission. Another salmon farm company vet gave evidence at those hearings about his company's fish health practices. “Every single fish gets injected by a vaccine to protect us against a lot of the endemic pathogens we have in saltwater to ensure that they are well protected before they go to saltwater.” The quote is on page 36 of the transcript.

Then there was another outbreak this spring at an Atlantic salmon farm in Clayoquot Sound. It resulted in over half a million Atlantic salmon being culled and dumped in a landfill, ergo the headlines. Salmon farm vets and scientists claimed the most likely source of the pathogen is the passing wild salmon. I couldn't understand why those nasty, dirty, sickly wild fish swimming all around open net-pens full of healthy, vaccinated farmed fish would be a problem. Then I read that the culled fish weren't vaccinated. That is even harder for me to understand, given all the 'facts' and testimony. And it begs question; why are these companies choosing to stick their unvaccinated, unprotected stock into an ocean of the wild fish carrying lethal viruses?

Now I read a new headline about more detections of IHNv, this time at two salmon farms one of which is less than seven kilometers from where the first diseased fish were culled and that only some fish get vaccinated because it is extremely expensive. The same reason is given for not investing in closed containment which could have better protected farmed salmon from natural pathogens while at the same time protecting the ocean environment from other adverse impacts associated with growing salmon in open net-cages.

That makes it easier to understand why pathogens are being detected at fish farms and reported more frequently. It doesn't really have anything to do with changes in the ocean, it seems to be more about cutting costs, crossing fingers and rolling the dice. And when things don't pan out, just blame it on the wild salmon.
Guest Blogger at 1:33 PM
Share